In ths post, I will share a bit about what I have been up to over the past few weeks. I plan on putting up my code soon!

For this project, I wanted to make use of a couple things that I learned at Metis. More specifically, I was interested in using BeautifulSoup, Statsmodels, and Scikit-learn to try and predict total adjusted domestic gross from movie data scraped from boxofficemojo. One of the main objectives of the project was to try and get a sense for how to collect data and make sure that it is in a clean enough format to run analyses on.

One of the things that I realized while participating in kaggle competitions is that a lot of the time the data comes in very nice formats. Most of the major data errors are already taken care of and there isn't much if any scraping that needs to be done to get the data (I can just download the data). Therefore, I figured it would be nice to get a sense for how to web scrape then clean the data myself to understand the process more completely.

Below are some of the objectives that I had in mind before starting the project:

The data scraping was one of the most time consuming parts of this project because it took quite a bit of time to define the business problem enough to come up with an idea of what I needed and it was also difficult at times to navigate through the nested tables (the HTML). However, BeautifulSoup made it quite simple to grab the HTML and parse through it.

More about the business problem. In order to make the project more interesting our instructors at Metis had us come up with a problem that we wanted to solve. For me, I figured I could use this the data and the model that I created to predict the total adjusted domestic gross. The motivating question for this is as a hypothetical merchandise production company (Nexus), we had already purchased rights from a couple movie studios to produce products for their movies. However, because production lines are relatively inflexible and take a while to reorganize, the business question was whether we could use a regression model to identify movies that would be more popular so that we could reorganize our production lines before crunch time (when the movies got immensely popular) to ensure that we properly allocated our resources.

With this problem in mind, it was time to start the scraping process. I decided to start by scraping as many movies as possible so that I could build out my training data set. When I looked at the a sample page on boxofficemojo, I noticed that a lot of interesting information was captured in the table at the top of each movie page. As a first step, I realized it would be quick to just take down this information.

I realized that if I really wanted to create a suitable training set then I needed to scrape many movies. In order to do this, I went to the alphabetical index and scraped the links of each movie (~16k) and passed each link into the previous information getting function. After these two steps, I had most of the information that I needed.

The next focus was to clean the data and start thinking about how to get the model up and running. I started by importing the dataframes that I had created into my Python environment.

With the initial data cleaning steps completed, I moved forward to building the linear regression models.

I wanted to create an initial plot to take a look at some of the data and make sure that things looked normal. I also created a residual plot just to check and see if the residuals were more or less random. 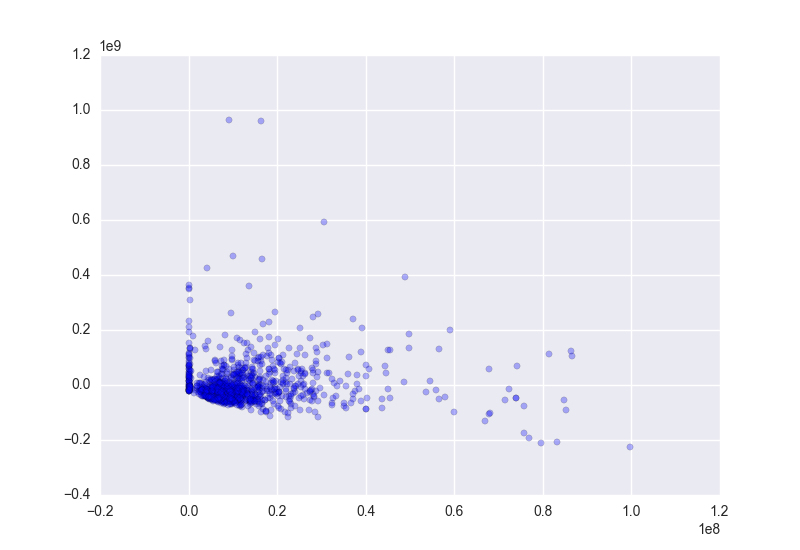 After fitting the initial model, the adjusted R-squared was .457, which was not too horrible for a first go. I continued the process of analyzing the shape of the residuals and further transformed variables that seemed to have non-normal residuals. 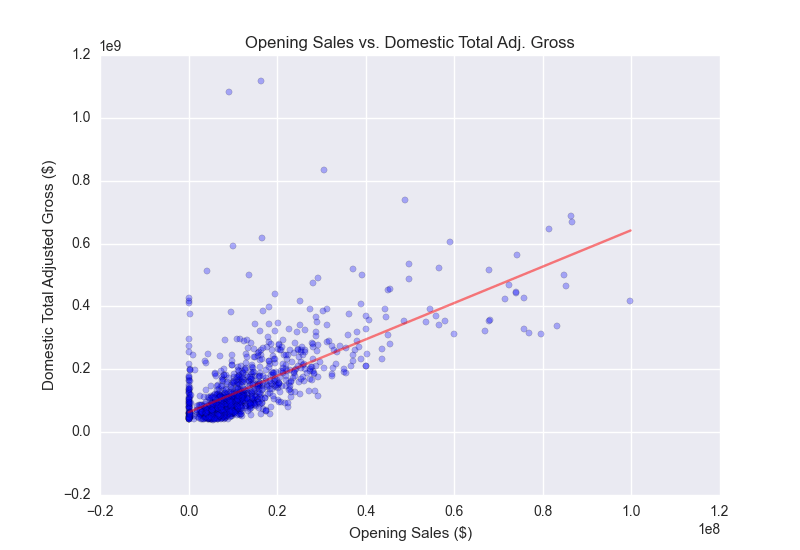 With the new data, I continued to iterate and build models successively by tuning the parameters (mainly by plotting the residuals and looking to see if the residuals were random/ checking to see that there weren't major collinearity problems). By this time the model's adjusted R-squared was at .657.

I figured it might be good to group the genres because some of the genres were occurring realtively infrequently. So I wrote a function to standardize the number of genres. However, when I ran the regression again, the model seemed to fit the data less well so I took out the new genre variable that I created.

After performing log and exponential transformations to the dependent and some of the independent variables, the model seemed to be more or less set (at least in terms of fit of the residuals and the adjusted r-squared ~0.70).

In the above code example, the Popular_Month independent variable is a generated binary variable based on which of the months were popular (May, June, July, November, and December).

Given that the model was explaning about ~30% more of the variance than the initial model, I felt like it was time to move to scikit-learn to do some train test splits along with cross validation to make sure that the model was performing as expected on unseen data.

The main reason for moving to scikit-learn at this point was to take advantage of the convenient cross validation tools.

The move to scikit-learn meant that I needed to make sure that the features were properly processed so that sklearn could take it all in. Unlike statsmodels, dummy variables are not automatically generated in sklearn so it is actually easier to generate the dummy variables using pandas.get_dummies() function. However, I made sure to delete one of the columns from each column that I was turning into dummy variables so there would not be collinearity issues.

Another benefit of using scikit-learn is that the regularized linear models are accessible and quite easy to use. I experimented with lasso, ridge, and eventually decided to use elasticnet because it makes use of both lasso and ridge regularization. (Also scikit-learn bundles cross validation and elasticnet which makes scoring and testing the models quite simple!)

In order to do cross validation, I used sklearn's train_test_split module to create 70%/30% splits of the ~900 or so observations. Then I trained the model on the 70% and performed 10-fold ElasticNetCV (with sklearn) and separately tested on the remaining 30%.

What Did I Learn

Throughout the process, I realized that I was going back and forth between many of the different models and features to figure out what combination worked the best. While I could probably have used grid search or something similar to find the best parameters and automatically build a model, it was fun to manually work through building the model step by step.

I also learned how to use BeautifulSoup to scrape data from a web page. While BeautifulSoup is a great package, I learned that it was still quite time consuming to figure out where the data actually resides.

Given that this project encapsulated many different aspects, I think that the main improvements and ways to continue learning is to refine each of the steps. For example: 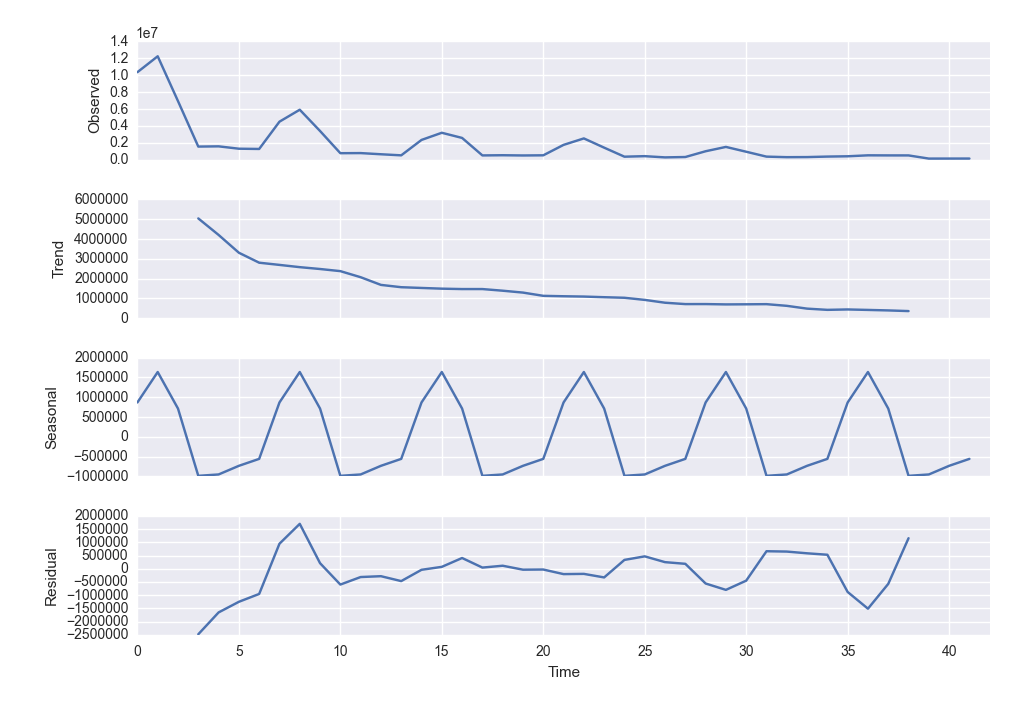 This was a fun project that exposed me to a lot of different tools and I look forward to learning more by continuing some of the ideas that I had about how to extend the analysis!