Mr. President, what did you say?

I know this may be annoying but embedding D3 in Pelican isn't the easiest thing so PLEASE click here to see the actual D3! The rest of the blog here will detail the process.

But still, hope you enjoy! 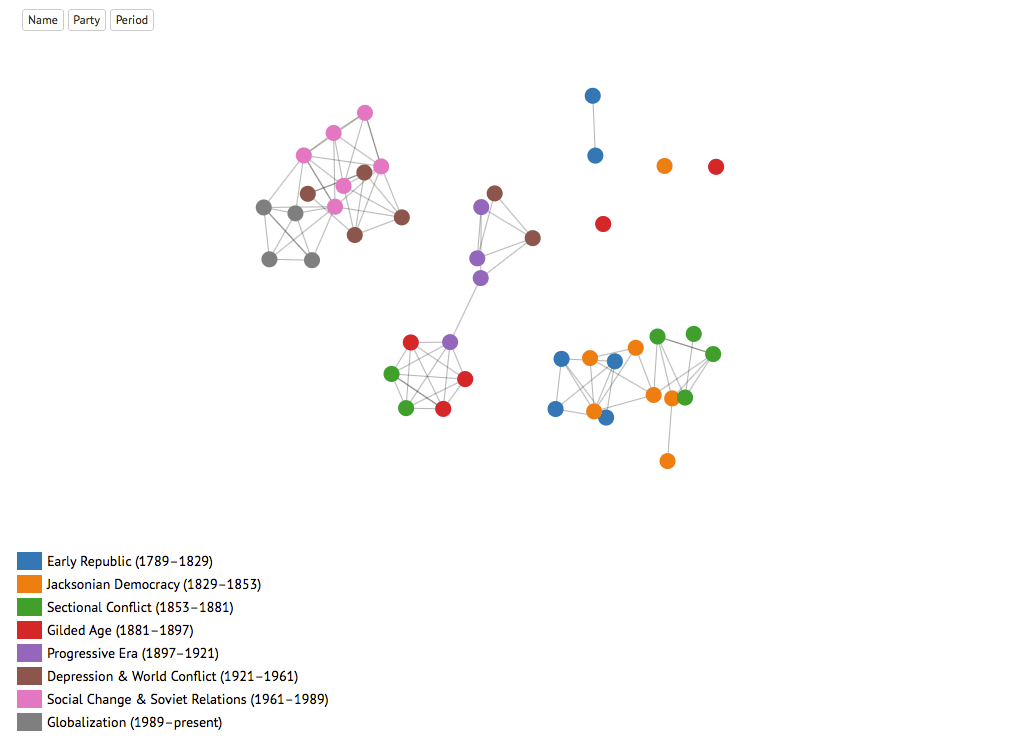 What are we doing here

I would like to provide some details both for whoever is reading and also for myself so I remember this project.

This particular project was one of the most difficult to date for me because it required the use of a couple different technologies in unison and also with this project, I tried to actually build most of the D3 visualizations by myself. As a result, it took a bit of time and I am quite proud of the outcome!

The objectives of this project:

The broader goal was to see if I could analyze text and see how presidents' were either similar or different in the topics that they discussed. I also wanted to identify if those topics changed across time.

MongoDB is really easy to get running. Remember that post about the census data? Well let me just post a little bit of code to show how quick it is to set up MongoDB (granted, this is on my local machine and not on AWS...but still I'm trying to make a point so forgive me).

Boom. After this you can just mongoimport entire .json files into your database as different collections or however you'd like. So all of that to say that it is definitely easier to get things set up and data into the database (not to say that SQL isn't good...they are good for different things).

With the database set up, I had to get my data.

There were a couple sites that had some great resources, but the one that I ended up using was the UC Santa Barbara American Presidency Project. It has speeches, press releases, and much more dating back to President Washington.

While it would have been great to have some form of an API to make calls to and get nicely formatted data, I did not have that luxury in this case and so I scraped the data that I needed using BeautifulSoup. Usually, this wouldn't be the easiest part, but this time it was actually quite simple!

Those three functions above are a sample of the functions that I wrote to scrape the State of the Union Addresses from the website. I had similar functions to scrape Inaugural Addresses and press releases. After getting all the text, I created dictionaries with the details of the speeches and used pymongo to connect to mongoDB so that I could store the data.

It wasn't necessary to use mongoDB because I used Python to scrape the data and was going to manipulate the data in Python,but I wanted to learn how to use the database for future reference. Furthermore, in case anything happened I wouldn't have to rely on the pickled files I created (as an extra saftey measure...).

If you took a look at the HTML page that I linked to at the beginning with the network graph of the presidents, you'll notice that there are clusters of presidents. Initially, I hypothesized that the presidents would be clustered by their respective parties; however, I turned out to be really wrong! They were mostly clustered based by the period in which they were president. This makes sense and I will discuss this later.

So how did I generate those clusters? Well, let me start off by talking about how I got to clustering.

One of the interesting techniques that I wanted to use was latent semantic indexing. Very basically, this technique uses matrix factorization (singular value decomposition) to map the documents into a vector space, then we specify the rank (kind of like the number of concepts that we want to keep). Afterwards, the passed in term frequency matrix is factorized into a term concept matrix, a square singular value matrix, and a concept document matrix. The concept document matrix can be thought of as a matrix that captures the latent 'concepts' within the documents.

Taking a Step Back

In order to learn more about what the presidents' talked about, I decided to dive down into the particular time periods. My thought was that if I could limit the president set to within the same time period, then some of the finer details of topics discussed would show up.

In order to extract the topics that were discussed in the different speeches and press releases, I decided that it would be more accurate to run the analyses on separate paragraphs. When a president gives a State of the Union Address or Inaugural Address, each paragraph is typically a separate topic; therefore, I made each paragraph an individual document (if it was more than 10 words long).

I used latent dirichlet allocation, which is a probabilistic approach to generating topics. Very basically, we start by randomly assigning k topics to a document (a mixture of topics), then each word in the document to a topic. This is a fairly poor representation of the topics at this stage, but it improves by going through and updating the topic for each word by choosing a new topic with probability that the new topic generated this word (here is an awesome explanation that is a lot more clear! Go read! seriously!).

Therefore, for each paragraph I extracted the most likely topic words (from the LDA output). Just to finish things up, I connected these topic words back to the initial paragraphs so that I could see the paragraphs that LDA determined to be a certain topic.

This project took quite a bit of coordination and also learning because I was trying to use different technologies that I didn't have much experience with. However, it was one of the most fulfilling projects, because by the end I had something that not only summarized the analyses that I performed, but also an interactive demonstration so that others could explore as well.

With that said, there are definitely improvements to be made.

Anyways, those are just a few that came to mind. I hope you enjoyed the post and the visualizations!